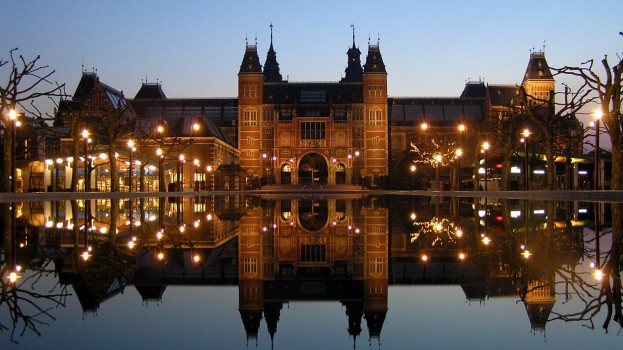 A visit to Amsterdam isn’t complete without paying a visit to the famous Red Light District, which has a nickname in Dutch: De Wallen. This name refers to the Warmoesstraat and the Zeedijk. This area is mainly known as Red Light District, which refers to the red lights that are burning behind the prostitutes’ windows. In this area prostitution probably even occurred before the 15th century, although not behind the famous windows. Many windows have disappeared over the past few years, but De Wallen is still tourist attraction number one with foreign tourists.

If you have time to visit only one museum while you’re in Amsterdam, we suggest you visit the Rijksmuseum. The Rijksmuseum is the biggest and most important museum in Amsterdam and the Netherlands. The museum is called the Rijks in popular speech, and is even more worth visiting after its renovation. It is well-known for its collection of Old Masters, such as Rembrandt, Vermeer, Hals, Cuyp et cetera. The absolute crowd-pleaser and highlight of the collection is of course Rembrandt’s Night Watch, officially named The Shooting Company of Frans Banning Cocq. Other top pieces are Van Gogh’s self-protraits (1887) and The Milkmaid by Johannes Vermeer.
Opening hours:
Open daily from van 9am-5pm.
Website: www.rijksmuseum.nl

Anne Frank has become a worldwide symbol of the horrifying Holocaust. Het Achterhuis is the title of the diary written by Anne Frank, a Jewish girl who had to go into hiding to escape the Nazis. Her diary is one of world’s most admired and best read books. Before the diary was even finished, the Frank family and four other people that went into hiding were found by the Nazis in 1944. They were arrested and deported to the Auschwitz concentration camp, which was survived only by Anne’s father Otto. Anne’s dream came true nonetheless, as her diary was published after the war. With the help of Anne’s diary, The Anne Frank house tells the story of this Jewish girl.
Opening hours:
November-March
Open every day from 9am – 7pm (9pm on Saturday)
April-June
Open every day from 9am – 9pm (10pm on Saturday)
July/August
Open every day (including Saturday) from 9am – 10pm.

Almost 125 years after his death, Vincent van Gogh is more popular than ever. Van Gogh is one of world’s most famous and popular painters and was talked about in the same breath as his contemporaries Cézanne and Renoir. The Van Gogh Museum at the Museum Square has the world’s largest collection of paintings by Vincent van Gogh: his self-portraits, landscapes, still lives et cetera. From The Potato Eaters to The Yellow House, which is also known as The Street. The museum also has an extensive collection of other artists, mainly contemporaries of Van Gogh. The museum gives a unique outlook on the life and work of the most famous painter of the Netherlands. The continuous collection is also often complemented by thematic expositions.

Opening hours:
The museum is generally open from 9am/10am until 5pm/6pm. Please see the website for the exact opening hours.

Numbers 2-4 used to be museums, but in fact Amsterdam is one big open-air museum and the Canal District (Dutch: Grachtengordel) is one of the most important attractions Amsterdam has to offer. Ever since 2010, the Canal District is part of the UNESCO World Heritage List. The Canal District consists of four parts: the Singel, the Herengracht, the Keizersgracht and the Prinsengracht, but it’s actually a whole network of streets, docks, bridges and canal houses dating from the 17th century (Golden Age) and 18th century. Be sure to take a canal cruise while you’re visiting Amsterdam!

Albert Cuyp, also named Aelbert Cuyp and Aelbert Jacobszoon Cuyp in full, was a Dutch painter from the 17th century, or the Golden Age. The Albert Cuyp Market is a market in De Pijp neighborhood, named after Albert Cuyp. The market has a history of over 100 years and is the largest and busiest market in Europe as it attracts a lot of visitors every day.

The Jordaan is a neighborhood in Amsterdam. Traditionally, the Jordaan is a typical working-class quarter. The Jordaan originates from the 17th century. In the 19th century, this neighborhood was almost bursting due to the increasing Amsterdam population. The living conditions were poor. This all changed by the beginning of the 20th century, although the problem of poverty and unemployment remained. In the 60s, this began to change, which caused the Jordaan to become the trendy neighborhood that it is today instead of still being a typical working-class quarter. Be sure to visit one of the nice cafés or have dinner at one of the restaurants in the Jordaan. We recommend café De Daalder (www.daaldercafé.nl) and café De Prins (www.deprins.nl). In these cafés you can also enjoy a good meal, for example at L’invité le Restaurant (www.linvitelerestaurant.nl) which is situated on the Bloemengracht and serves modern French dishes.

Leidse Square (Dutch: Leidseplein) and the Rembrandt Square (Dutch: Rembrandtplein) together account for the entertainment area of Amsterdam. Here you can find many cafés and café terraces, and to many Amsterdam people a night out is similar to a night on the Leidse Square. The Leidse Square has got something for everyone, from pubs to trendy bars. Our picks are Café de Spruyt (www.despuyt.nl), one of the few authentic cafés on the Leidse Square. Then there’s three story high Club Church (www.clubchurch.nl) and of course famous dance club Jimmy Woo (www.jimmywoo.nl). Intellectuals can come to In De Balie(www.debalie.nl).

The Vondelpark is a public park and a listed monument in Amsterdam South, named after Dutch poet and dramatist Joost van den Vondel. The park was opened in 1864 and is 47 hectares in size, of which 8 hectares is water. Ten million people visit The Vondelpark every year – people from Amsterdam as well as tourists. In 2010, the restauration of the park, which took more than ten years, was finally finished. At the park you can also find the monumental the Blue Tea House(Dutch: ‘t Blauwe Theehuis), a modernist pavilion dating from 1930 which is now a café and a restaurant with terrace. It sure is worth paying a visit!

Dam Square (Dutch: de Dam) is a square in the centre of Amsterdam. In the middle of the square you can find the National Monument, a memorial for World War II victims. Dam Square also hosts two other figureheads from Amsterdam: The Royal Palace (Dutch: Paleis op de Dam) which started out as town hall. Next to the Royal Palace you can find the New Church (Dutch: Nieuwe Kerk), where the wedding ceremony of Prince Willem-Alexander and Maxima took place on 2-2-2002.
This is only small selection of the many cool spots in Amsterdam. De Begijnhof, Madame Tussauds (www.madametussauds.com/Amsterdam), The Amsterdam Dungeon (www.thedungeons.com/Amsterdam), Artis Zoo (www.artis.nl), science center NEMO (www.e-nemo.nl), The National Maritime Museum (Dutch: het Scheepvaartmuseum) (www.hetscheepvaartmuseum.nl) and the Amsterdam Museum (www.amsterdammuseum.nl) did not make it to this top 10, but are worth seeing nevertheless.
Please let us know if you have any tips!
When you’re planning on staying the night, we would like to help you during your stay. We can offer maps and tips for using the public transport and such. When can we welcome you to our city?
Visit our Amsterdam hotel location page for more information.