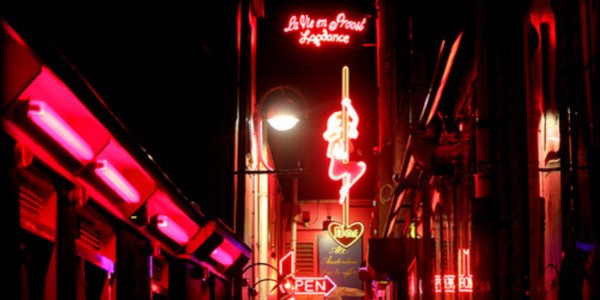 The ‘red-light’ part in ‘red-light district’ is associated with the red lamps in the brothels. But does the term ‘red-light district’ even come from red lamps? And why aren’t the lamps yellow or green?
According to the Oxford English Dictionary, in the 19th-century Old West there was a saloon and a bawdy in Dodge City, Kansas called Red-light House. This is possibly where ‘red-light districts’ comes from. The story goes that the railway workers left their red lamps burning outside while they were visiting a brothel, so that they could easily be found in case of emergency. This is probably an urban legend.
Another explanation could be that the red lights were used to make red spots on the prostitute’s skin invisible in order to disguise venereal diseases. According to former prostitute Metje Blaak one simply looks better by using the combination of red and black light; therefore it has nothing to do with hiding venereal diseases.
The third and last explanation comes from the Bible. In the book of Joshua we read the account of a prostitute called Rahab. The story goes that she marked her house with a red string. Since then, the color red was linked to prostitution. Being an ally of the Israelites, she had to mark the house with a red rope when the Israelites invaded Jerico. This way she and her family would be saved.

Ever since the 15th century, or even before that time, there has been prostitution in the area surrounding the famous tourist spot ‘Amsterdam red-light district’. However, window prostitution didn’t emerge until the 1930’s. Back in the day there were mainly street walkers, which are now prohibited.
The city has been trying to regulate and regiment prostitution since the 16th century. It used to be prohibited in certain areas, although it was often still tolerated. Prostitution increased strongly during the 60s, as the police became more tolerant and prostitution took place more publicly.
Not too long ago, the area where prostitution is allowed has been limited by the city. There are worrying signs that some of the prostitutes have been a victim of human trafficking and are forced to work as a prostitute. With the new policy, the city wants to reduce this number.

The red-light district is particularly known as a red-light district. But it’s not only ladies of pleasure, brothels, sex shops, strip clubs and sex theatres you will find on De Wallen. There are numerous nice restaurants in this neighbourhood, like Blauw aan de Wal on the Oudezijds Achterburgwal and Thai restaurant De Kooning van Siam on the Oudezijds Voorburgwal. Have a drink at one of the sociable pubs, like Molly Malone’s Irish Pub. Of course you will also find coffeeshops on every corner, as it is the other big Amsterdam tourist attraction. For example, the world famous Bulldog.

On De Wallen you will also find the Old Church which is a national monument. Not only is it the oldest church, but it is also the oldest existing building in Amsterdam.
In the Old Church organ concerts and expositions are being organised on a regular basis. Until 16 June 2014 you can visit the art project Stof tot nadenken (“Food for thought”) by Sara Vrugt. Together with the public she breathes new life into the 118 chairs in the Old Church. The design of the chair upholstery is inspired by stories of locals and the church community.
The church is open to visitors from Monday to Saturday from 10am – 6pm and from 11am – 1pm on Sunday.

There are various fun and informative tours and city walks on De Wallen.
Amsterdam Excursions organises the tour Tippelen met ouwe hoeren. Amsterdam Mokum Events has called its tour Koekeloren bij de hoeren Amsterdam Tour has a Wallen Tour and Local Experts has a tour across the Amsterdam Wallen.